The specialist company "Creativ Bad" has supported the charitable project "OWL School in Cameroon" with a donation of 250 euros.
In the 30th anniversary of the company at the Neustädter Straße two weeks ago, visitors could participate in a raffle. The total of 250 raffle tickets for one euro each were intended for the foundation of the school in Cameroon. The prizes amounted to a total value of 8000 euros.
The main prizes included an illuminated bathroom mirror and two vintage car rides.
Owner Rainer Clayton already supported the project in the past.
The contact came about through a business relationship between him and Andreas Pawlik.
The owner of the "Jokisch" factory and at the same time chairman of the supervisory board of "OWL Schule
in Cameroon" has been involved since 2008 in the construction of a daycare center and elementary school in a suburb of the capital Yaounde.
suburb of the capital Yaounde in Cameroon. Together with the chairman of the association Victor
Kodzo Dzissah, he initiated the project. 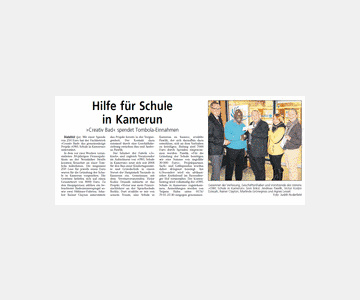